Today we buy gallons of gas. With EV’s we buy what? 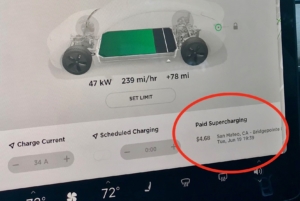 In June I was excited to use Turo’s novel car sharing app to rent a Tesla Model 3 while on a trip to San Fransisco.  After pickup at Turo’s SFO airport location, I headed to Target in San Mateo, where the store hosts several Tesla superchargers.  Unlike Tesla’s Model S and X, the Model 3 doesn’t come with free charging – so I pulled in knowing there would be a cost.

Like connecting your dead cellphone, plugging into an EV charger gives you that same sigh of relief.  Where Level 2 charging may add 25 miles of range per hour, Tesla supercharging is a quicker fix, moving the green bar to add 300 miles of range in the same time.  But so moves $ counter.  Mine settled on $11.47 when the partial charge was complete.

What an interesting contrast to paying at the pump.

Gasoline prices are a spot market, signs at gas stations are the signal and consumers know the prices.  There’s an emotional reaction to the latest price per gallon and even a brief downward trend can reduce sales of more fuel efficient vehicles.  But consumers have no such sense for their price of electricity.

Gasoline and electricity have a similar sized share of the consumer’s wallet.  The average US household spends $2k per year filling their tank and knows their price per gallon.  The same household spends $1.3k per year on electricity, yet most consumers have no idea about their actual cost per kilowatt hour.  At Groom Energy we see the same information gap with our commercial and industrial customers.

So why is that?

Electricity flows on tap with a monthly bill.  The as-a-service model doesn’t visibly portray a per unit rate, like you get holding the pump handle.  Consumers know the cost of their recent utility bill, not their usage.  Unlike gas, unit pricing doesn’t fluctuate daily and electric bills don’t come with the average per kWh neatly highlighted.  Even if you study it, only 50% of the bill covers the actual electrons while the remaining costs are the sum of a dozen, cryptic itemized fees and taxes.

California leads the country in changing the way consumers think about kWh pricing.

The average US car owner drives 29 miles per day.  This fall the newest EVs come with 200+ mile range, meaning Level 2 home charging a few hours each night will suffice.  Homeowners will see a higher electric bill, but will likely ask “what’s my equivalent cost to “fill up?” vs. my ICE car.  In San Fran, my friend Raj Atluru of Activate Capital tells me his Tesla is configured for midnight charging to take advantage of PG&E’s EV-A rate plan, with $0.13 kWh charges vs. off peak at $0.25 kWh and peak rates at $0.33-$0.47 kWh (winter/summer.)

Public EV charging networks are in buildout mode, acquiring new customers with every EV shipment.  Half of all chargers today are still free, with new twists like recently funded Volta, that provides free charging in exchange for watching advertisements.  But free charging from publicly funded stations will shift to a pay model as EV volumes increase and the world becomes comfortable with a common pricing model.

Chargepoint, the nation’s largest independent EV charging operator, has a subscription fee and per usage model, where “local pricing is determined by the property owner.”  Jordan Ramer, CEO of EV Connect told me they’ve implemented virtual gas station signs with push notification for pricing windows of time.  With the largest supercharger network and Model 3’s now shipping in volume, Tesla’s also in a position to define how we think about our cost to charge.  Tesla’s site currently quotes kWh rates per state but also notes “where possible, owners are billed per kWh and in other areas, we bill for the service per minute.”

With jurisdiction over sales of electricity to consumers, state public utility commissions will have their say as well.  California’s CPUC is already studying early EV charging price disparities.

Uber’s already trained us on a simple travel pricing analog: matching the distance we travel to our cost, with inflation during periods of congestion.  The EV charging networks already know your EV’s specifications, local electricity rates where you’ll likely charge, and over time, how your car’s battery life is degrading – so they could easily introduce this simpler $ per mile pricing approach.

We’re not yet flying Jetson cartoon cars in Year 2062, but we are on the edge of a more autonomous, shared car-as-a-service world.  It’s early days, they’ll be lots of experimentation, but eventually the market will converge on a more consistent unit pricing model, whatever unit that is…However it plays out, in an increasingly electrified world, we’re ready for more educated consumers who can make more informed, real-time behavior tradeoffs in exchange for dollars in their pocket.  Ideally, new AI-software makes all these tradeoff decisions for us.

And that Tesla 3?  A stunning driving experience – and worth every penny of the $11.47 charge.

Dalkia, EDF Group is fully equipped to deal with customer needs during the worldwide coronavirus pandemic.

Under the circumstances, and in strict compliance with all federal and local government mandates, we are doing everything possible to ensure the safe and effective delivery of our energy efficiency solutions, making the health of our customers, employees and service providers our top priority.

Our sales, development and operational teams are currently in contact with your organizations affirming our approach and gathering feedback regarding any additional actions which might be necessary to accommodate your organization’s specific needs.

Please reach out to us at info-g@dalkiasolutions.com with any questions.

Ok
Remember Me
We use cookies to ensure that we give you the best experience on our website. By continuing to use this site you are agreeing to use cookies.Accept